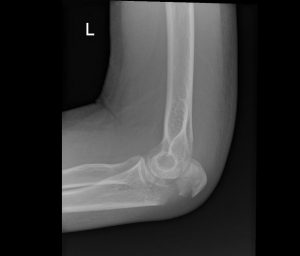 Reed, an active 69 year-old male rower, went walking in a rocky jungle in Belize when he slipped and fell landing hard on the point of his left elbow. His entire arm swelled massively but he was not able to see his doctor, Dr. Dennis Cullen, until he returned home. Dr. Cullen referred Reed for x-rays and an MRI to assess the damage to his elbow. He sustained a displaced, comminuted fracture of his olecranon, visible in the x-ray below.

The imaging revealed four major fracture fragments of the olecranon and a pre-contoured Acumed plate was assessed to be the most appropriate construct for repair. Dr. Rudzki and the patient reviewed the images with his wife and discussed the role for surgical repair of the fracture. The open reduction internal fixation (ORIF) surgery was scheduled for the next day at the Bethesda Chevy Chase Surgery Center.

“I was amazed the doctor was willing to do this complicated operation the Friday night before the New Year’s weekend holiday. It was a great relief to be in his care. He and the whole team were incredibly attentive.”-Reed, May 4th 2018 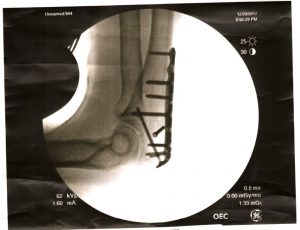 This image was taken on the day of the operation.

During the ORIF procedure, a 10cm incision was made to dissect down to the fragmented bone. The bone fragments were aligned, and an Acumed plate was compressed to the bone for optimal plate position. Lag screws were used to secure the bone to the plate. Fluoroscopic imaging was used throughout the procedure to confirm appropriate reduction, anatomic fracture alignment, and stable appropriate implant position. At the conclusion of the procedure, the patient’s arm was found to have full flexion and extension and no restrictions to pronation or supination. The procedure went well, and there were no complications. 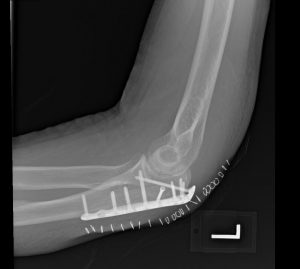 Reed was seen back in the office for his post-operative follow up one week after the procedure. His wound looked good, and his x-rays showed stable and proper implant position. He was instructed to begin gentle flexion and extension exercises and was told to lift nothing heavier than a pencil. He started physical therapy within a week, which he then attended regularly for the next 3 months. The primary focus of the initial physical therapy was to work on restoring the range of motion of his elbow to avoid stiffness and limited range of motion. His therapy regimen involved doing his home exercises at least twice per day.

“I had a meeting with Dr. Rudzki in which he told me squarely that I had to commit to a rigorous schedule of physical therapy if I wanted to regain even the semblance of reasonable range of motion. He was confident the surgery would knit the many shattered bones in my arm. However, he said, my recovery depended on not just his technical expertise but also the physical therapy.”- Reed, May 4th 2018

At Reed’s one month post-operative follow up, he was heading in a favorable direction but still experiencing some stiffness in his range of motion. At this point, Dr. Rudzki ordered the use of a Dynasplint to help increase the progress with range of motion and decrease the recovery time. Reed worked with therapist, Amanda Plumb, at Washington Orthopaedics and Sports Medicine’s Smart Therapy practice who provided expert care. Dr. Rudzki saw Reed in the office for follow up visits each month following the surgery. At his most recent visit, Reed was 3.5 months out from surgery and doing great.

“I can’t praise enough the partnership between Dr. Rudzki and Ms. Plumb. I can’t emphasize enough the importance of their candor, their ingenious  exercises, and their emotional support. The record will reflect the steady incremental improvement in range of motion. I could barely bend my arm before the operation and now I can button the top button of the shirt, comb my hair, and reach for the check. Soon I will be rowing on the river again as I have done for the last 40 years.

Without question, this therapy has been the most arduous physical experience of my life. I have climbed 14,000 foot mountains in Colorado and exercised every day of my life for the last 40 years so I know what I’m talking about.

Jonas and Amanda basically rebuilt my arm. It took a long time. Some days I got down. I would’ve lost heart and probably given up without their encouragement. I am sure the doctor is a technical genius. But more important than that he is a fine, caring person. Amanda Plumb will also have my deep gratitude forever.”- Reed, May 4th 2018 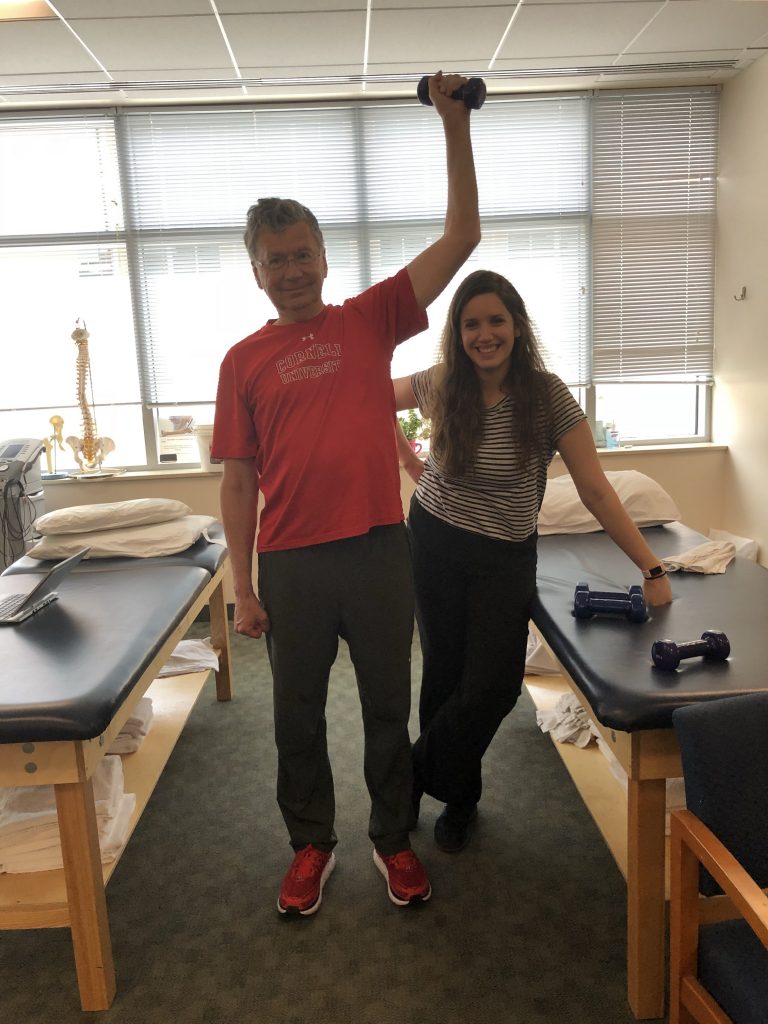 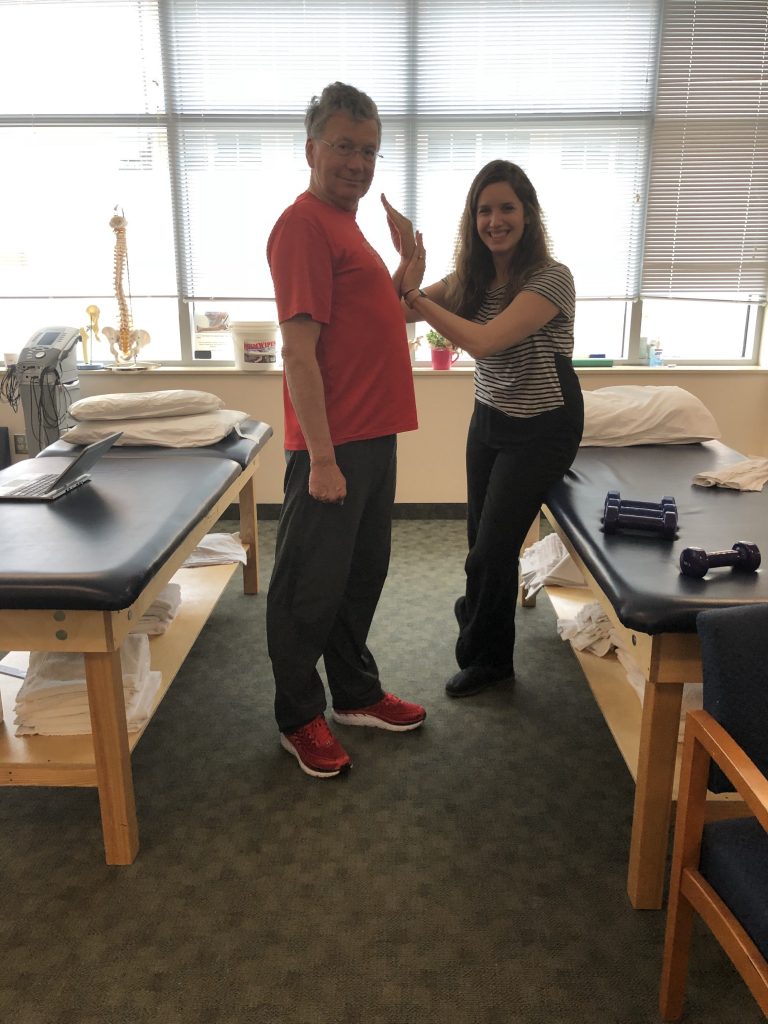