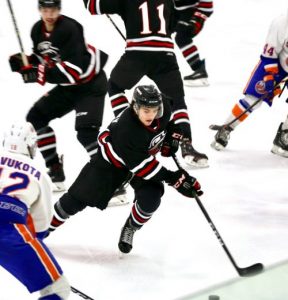 Henry was a junior elite ice hockey player at the time of his injury. He felt his shoulder forcefully sublux (pop out of place and go back into place) due to a water sports injury where he fell onto his outstretched arm into the water. Later that day, his shoulder subluxed again. The next day, his shoulder subluxed in his sleep. He had never had any previous instances of shoulder instability. Subluxation is when the shoulder joint partially dislocates, meaning the humeral head slips out of the glenoid cavity and then pops back into its socket. These instability events can be extremely painful and can damage the shoulder’s capsule tissue, making it more likely for future subluxations and dislocations.

Work Up/Imaging
An MRI without contrast or an MR arthrogram can be used to diagnose the extent of the damage to the shoulder’s labrum and joint capsule. In Henry’s case, he had an MRI without contrast that showed a Hill-Sachs lesion and tearing of the anterior labrum. A Hill-Sach’s lesion is a cortical depression in the head of the humerus due to an impact injury in which the humeral head (ball) collides with the anteroinferior glenoid rim (socket) during a shoulder dislocation.

Having had three instability events and a Hill-Sach’s deformity seen on the MRI, and given Henry’s young age and elite hockey performance, statistically, his risk of reinjury would have been over 85-90% without surgery. Instead of risking likely reinjury, Henry chose to have surgery to repair his ligaments and labrum to stabilize his shoulder. In May of 2017, he had an arthroscopic shoulder stabilization procedure. He tolerated the procedure well, and there were no complications.

After surgery, Henry stayed in a sling for six weeks and he began physical therapy 4 weeks after the procedure. With physical therapy and a functional progression of strengthening exercises, Henry has since been able to return to to professional ice hockey. He currently plays for the Boston Bandits.

“As far as the recovery, it takes time, and Dr.Rudzki did his part, so the athlete has to take responsibility for the rehabilitation and must understand it’s a process- maybe even without an end- to continue to be better than before.“- Henry 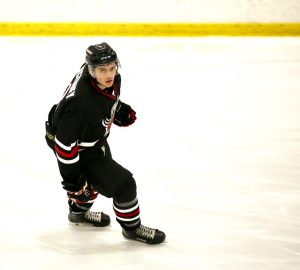 Dr. Rudzki is an expert in shoulder instability who performs arthroscopic and open shoulder stabilizations with several techniques including primary arthroscopic repair, latarjet, and remplissage.  Dr. Rudzki has published on shoulder instability and lectures on this topic frequently. A recent lecture can be found here. He has a specific focus on post-surgical rehab protocols and has developed several protocols for return to contact-collision sports.