Complex Proximal Humerus Fracture Sustained in ski accident in Italy. The injury required surgical treatment for a displaced proximal humerus fracture (shoulder) and a titanium rod and screws are placed in the humeral canal. The patient then returns home via medical jet and is transferred directly to Sibley Memorial Hospital for care of her shoulder and pelvis.

Unfortunately while the alignment of the fracture is good, the rod is prominent and will erode the shoulder joint, shoulder blade, and clavicle. The fracture is not healed and the patient’s shoulder is becoming quite stiff. A shoulder consultation is requested and plan of care developed to allow the fracture to heal and then carefully remove the rod, repair the rotator cuff, bone graft the humerus, and release the stiff shoulder capsule all through an arthroscopic approach. 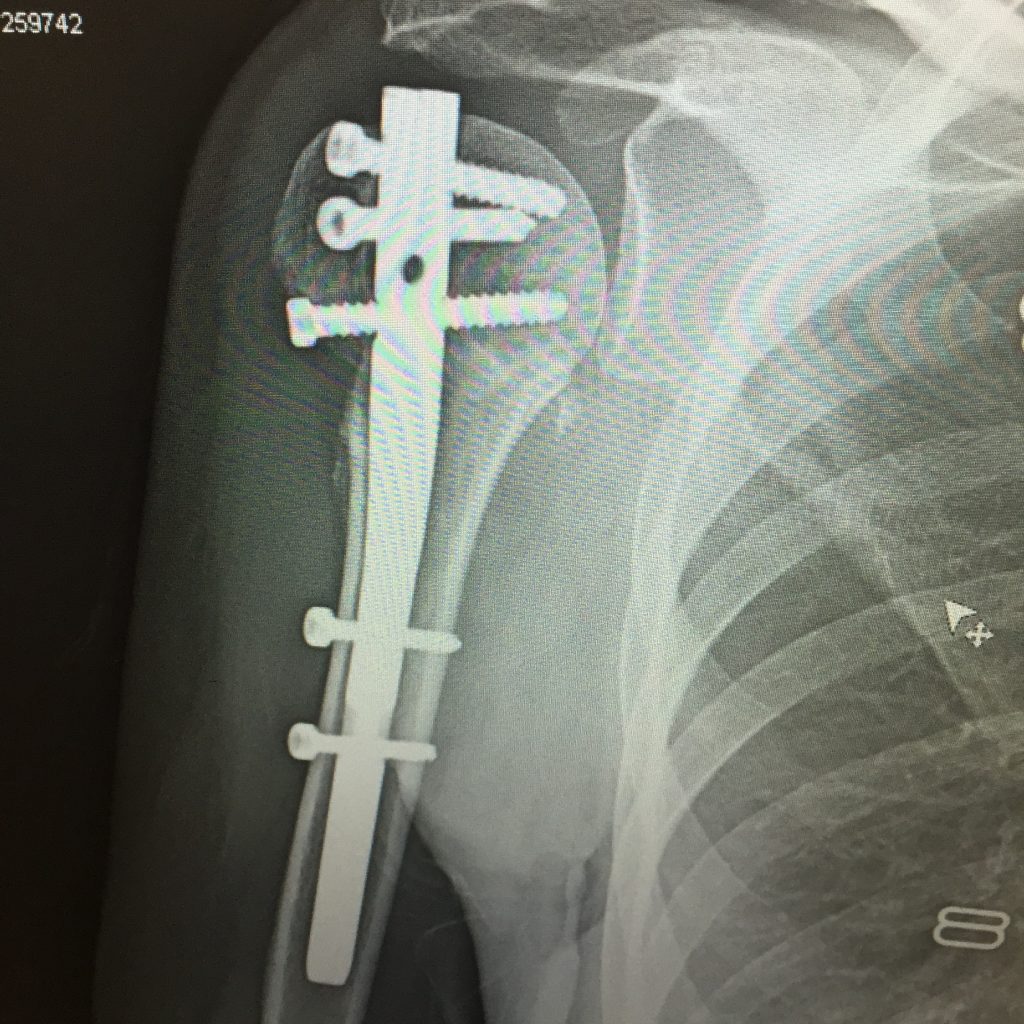 In Her Own Words

My story begins just over one year ago on March 3, 2016 in a remote Italian ski village. After a long day of skiing, I was taking my last ski run back to the hotel, carefully making turns on a slope that by this time of the day was busy with other skiers coming in and was heavily chopped up and bumpy. Suddenly out of nowhere, I was hit from behind and thrown down slope by presumably an out of control skier who never stopped. In an instant, I was on the ground, with my head facing downhill and my skis and legs twisted around on the uphill side of the slope. My right shoulder and hip were crying out in dire pain. I immediately knew that without help, I was not going to get off of that mountain. Fortunately, two Italian men and a ski instructor were nearby and while none spoke much English, and I spoke no Italian, they could tell I was pretty seriously injured. They called for the ski patrol. I was strapped into a ski gurney and with one young man in front and another in back, I was skied about 2 miles downslope and then ambulanced to the village clinic. After x-rays of my hip, pelvis and shoulder, I was told that my shoulder humerus had suffered a displaced fracture that would require surgery, but that my hip and pelvis were bruised but otherwise would be fine. I was then put in another ambulance and transported to the closest public hospital an hour away for further evaluation. 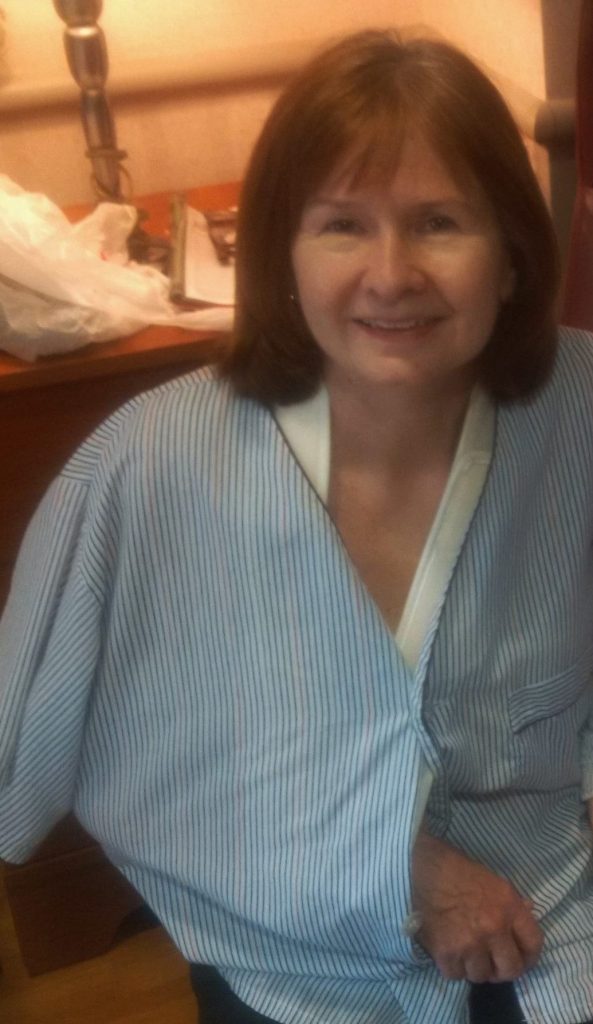 Needless to say, at this point, I was in near panic mode and doing all I could to remain calm. Not only was I in pain and concerned about how bad my shoulder injury was, but I was not sure the assessment that my pelvis was okay was a correct one. In addition, I was in a foreign country where I did not speak the language and was by myself at the hospital. Because I was the last in our ski group coming down the slope, there was only one other couple who was aware of my accident and they had gone back to the hotel to inform the others. But neither they nor I knew where I was being taken.
Once at the hospital, more x-rays again confirmed that my shoulder would require surgical repair before I could fly home. I was then admitted, given a bed and told that it would be the next day before I could speak to an orthopedic doctor about my situation.

Fortunately, I had my cell phone with me and began the first of many calls to notify my husband back in Virginia, my skiing friends at the hotel, and my medical and trip insurance companies. 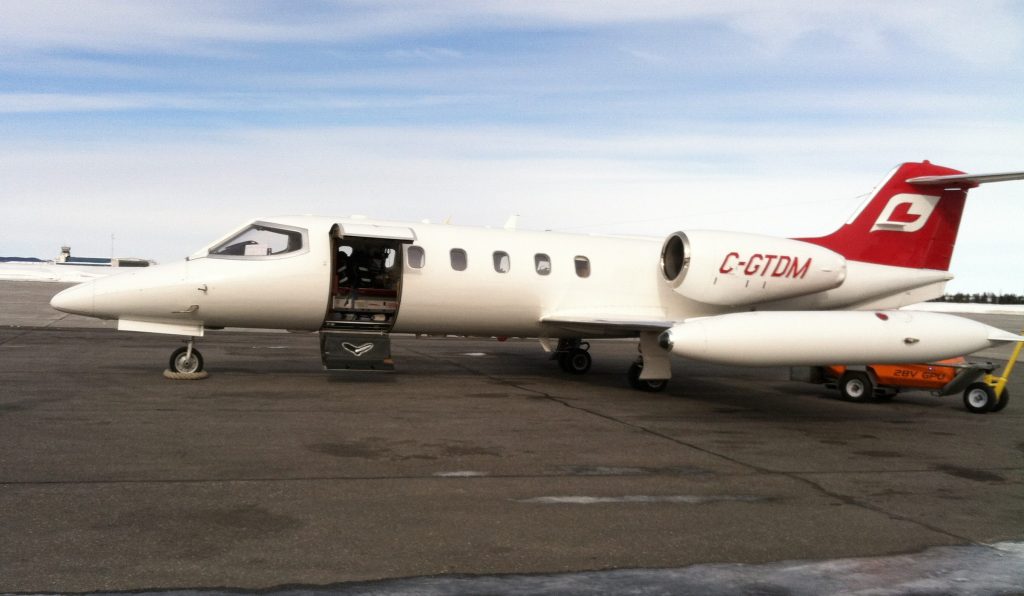 The next day and the nine days following were almost a blur as I worked through the bureaucracies and paperwork of insurance companies and hospitals from an overseas location (and a six hour time difference), tried to understand the doctor’s broken English of how my surgery would be performed, and ultimately underwent shoulder surgery. Also, during this time I learned that my pelvis was not as okay as the doctors had first suspected and that a CT scan (that I requested) showed that I had indeed suffered a pelvic fracture on my right side in addition to the shoulder break. While not requiring a surgical fix, I would have to remain on bed rest for eight to twelve weeks thereby adding yet one more complication to my situation. Being unable to walk, I would now need a medical air evacuation back to the US! After yet more calls and several more anxious days in the Italian hospital, I finally was taken to and boarded on a specially equipped medical jet for my 12 hour return flight home. And for the first time since the accident, the medical crew spoke English!

Thanks to my husband’s behind the scenes work with my primary care doctor, I was ambulanced upon my arrival directly from the airport straight to Sibley Hospital where I was hoping to finally relax and slowly begin to recover. But luck was not yet on my side as x-rays at Sibley showed that the shoulder surgery performed in Italy was improperly done. The titanium rod that was put in to repair the humerus had not been sunk deep enough into the upper arm bone and was protruding up into the shoulder joint. With any movement above shoulder height, the rod was rubbing and eventually would abrade the shoulder joint and clavicle, preventing me from ever regaining full use of my shoulder.

It was at this point that I was emotionally exhausted and at my lowest when suddenly my white knight appeared in the form of Dr. Rudzki who had been recommended by my primary care physician. He assured me that he could fix my shoulder, but it would be a difficult surgery and not without risks. He said the titanium rod would have to be pulled and in its place a bone graft would be inserted that would provide a lattice structure for my bone to grow into over time. However, a real concern was that my now very fragile upper arm could collapse or shatter when the rod was removed. In addition, another surgery would bring yet more trauma to the surrounding soft tissue, making it difficult to predict how well my shoulder would recover and how much eventual use I would get. But Dr. Rudzki was confident that he could successfully perform the surgery and while making no promises, he assured me that I would have a shoulder that would certainly perform better than what I currently had and optimistically would approach my former functionality. 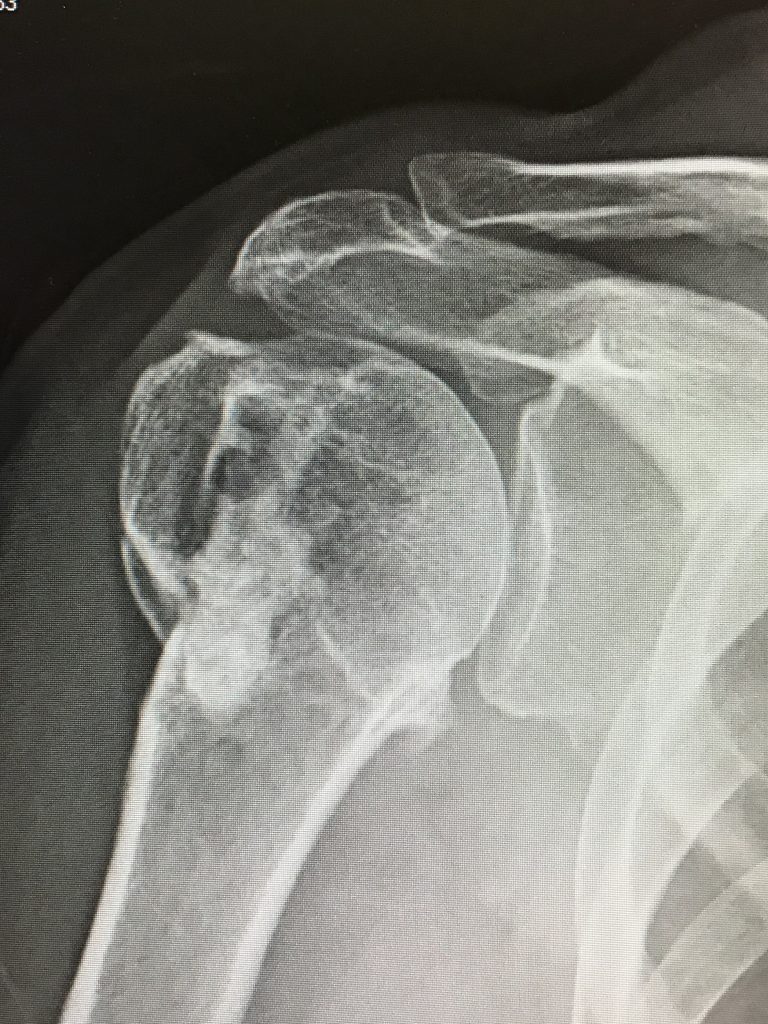 To further ease my concerns over the next few weeks, he explained that he had consulted with other orthopedic specialists around the country who also believed this surgery was necessary and had received their advice on the various options for repairing my shoulder. He had clear back-up plans for what he was prepared to do if my arm bone should collapse when the rod was removed. And he showed me x-rays of a former patient who had recovered successfully from a shattered knee. Similar to what he was proposing for my shoulder, Dr. Rudzki had used a bone graft to repair her knee and with physical therapy and time, this patient was now back to running again. Dr. Rudzki fully believed I could have an equally good result.

Beyond these assurances, Dr. Rudzki said he was very sure that he could give me the best possible outcome. He felt comfortable doing challenging surgeries like mine and believed without question that this surgery was worth the risks. His enthusiastic optimism and self-confidence gave me a sense of relief and comfort in knowing that I was making the right decision to both have the surgery and to have Dr. Rudzki perform it.

And so three months after the initial surgery, I was back at Sibley Hospital to undergo a second surgery on my shoulder and this time it worked! As he promised, Dr. Rudzki successfully removed the titanium hardware, filled in with a bone graft, and two days later sent me home. He was extremely pleased with the surgery’s success and said the best possible result had been achieved. Two weeks later I began the first of many months of physical therapy on my shoulder. While the therapy and homework exercises have not been easy and not without some pain, I have regained approximately 85 percent of the use of my shoulder. I am again able to reach overhead and up into cabinets, carry groceries, cook, blow-dry my hair, and even ride my bike and do some light yoga classes. And so far, I have been able to avoid a third surgery! 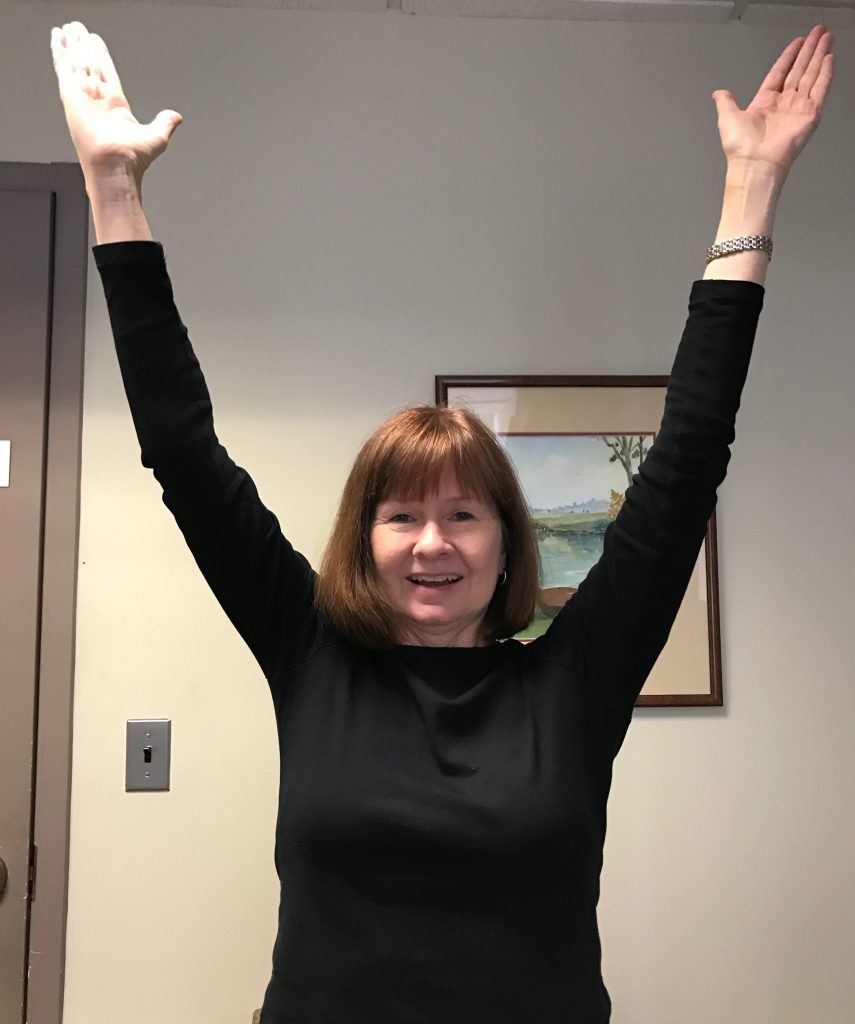 This is an amazing outcome given that just ten months earlier, more surgery was considered likely. But I am continuing with weekly physical therapy for another several months in hopes of maximizing and pushing the limits of my shoulder’s recovery. After that, I hope I can finally put this unfortunate episode behind me. I am ever so grateful to Dr. Rudzki and feel so lucky to have found him. He is not only an excellent surgeon but he is also a very genuine and caring person. In addition to fixing my shoulder, he referred me to well trained and competent therapists that could work with me before and after the surgery. They have and continue to help me recover both physically and mentally and have made a huge difference in getting me through this very difficult medical crisis. I cannot thank him enough!